The fédération des gardes paroissiales is a federation founded in 1949 which group together uniformed catholic organisations from parishes mostly in quebec but also in the french speaking parts of new brunswick and ontario. Despite the uniform of the gardes paroissiales ("parish guards"), the martial aspect of the units is strictly symbolic as they do not carry weapons or engage in security type activities.

The federation had at its peak tens of thousands of members but has now dwindled to just below one thousand spread over 37 units (some were amalgamated due to low membership).

They are mainly visible nowaday as musical marching bands but in former years were quite active in religious and civic events, forming guards of honour, accompanying the local priest during the guignolé (door to door collection of food and money for the parish's poors) and taking care of the collection plates during mass. They also had a more general caritative and mutual-aid purpose.

Although the cut of their uniform is more or less the same (looking similar to the dress uniform worn by police/fire departments in quebec), the colour of the cloth and embelishement varies from units to units with no two having exactly the same. There is a common rank insignia system used by most units although it should be pointed out that at least 2 appear to use completely different ones (one looked like unification era canadian army and the other like the sureté du québec).

This FGP system is based on the british one more then likely as the federation was founded at a time when this was the one in used by the canadian army: 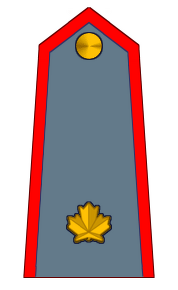 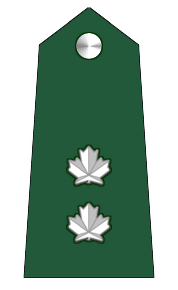 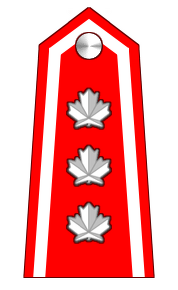 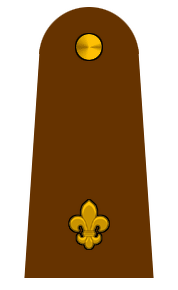 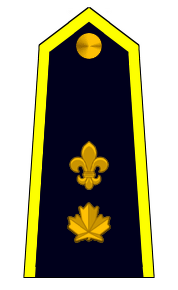 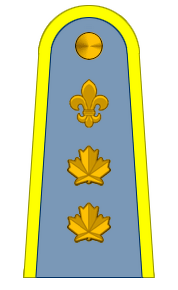 There are no higher ranks then Colonel although as ranks are linked with the position a person occupy within the federation, some colonel can be considered to be higher in the hierarchy then others:

Position at the federation level are indicated by a red armband with the position's name in yellow, at the union level by a yellow armband and at the unit level by a patch worn on the upper arm below the unit emblem.

The presidents, commanders and chaplains at all 3 levels wear a fourragère (usualy yellow but in some cases white) around the right shoulder while the other officers wear one around the left. Honourary colonel can be recognised by the fact that they wear a colonel insignia without the fourragère.

Community content is available under CC-BY-SA unless otherwise noted.
Advertisement